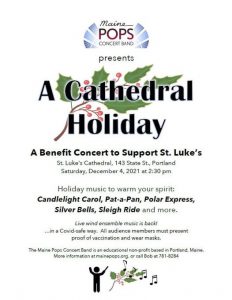 Yes!!! The Maine Pops Concert Band is back and performing in the greater Portland, Maine area. After concluding its first formal performance in nearly two years with its Fall concert held November 21 in Portland, the Maine Pops is now preparing for two Christmas holiday concerts in December 2021.

With COVID-19 still present and impacting numerous indoor rehearsal venues, the band continues to work with the community it serves for a safe, and practical rehearsal site.  The band continues coordinating with local schools and other potential indoor rehearsal locations in hopes of obtaining an indoor location with colder temperatures now here.  As soon as venue is obtained, we'll update.

As of the end of November, the Maine Pops Concert Band has nearly 60 registered musicians for the 2021-2022 season.  The band's membership drive continues to bring back Maine Pops musicians to pre-pandemic levels, and recruit new members to the ensemble.  Those interested in joining can go to The Band – Maine POPS Concert Band.

Although the COVID-19 pandemic cancelled all 2020-2021 live performances, the Maine Pops stayed musically active using virtual performances to keep its members playing. The band released a virtual Christmas concert in December of 2020, then spent the spring of 2021 in virtual rehearsal, releasing five single performances between February and June. In all performances, band members recorded their parts at home and submitted tracks for production.

The Maine Pops returned to in-person rehearsals in July of 2021, ending 16 months of pandemic seclusion with a nine-week summer rehearsal season in Falmouth. About a third of the current membership spent the summer reuniting with fellow musicians and regaining their musical endurance in preparation for the fall season.

For more information on our continued musical mission, reach out to Bob Swerdlow at president@mainepops.org.