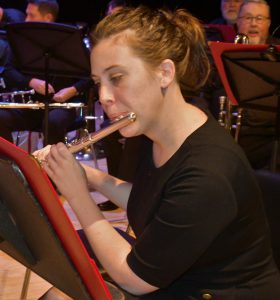 After 16 months of suspended rehearsals and performances caused by the COVID-19 pandemic, the Maine Pops Concert Band will resume in-person rehearsals on July 1, 2021.

The band has slated weekly rehearsals every Thursday evening in July and August from 6 to 7:30 p.m. at the Falmouth Village Park in Falmouth, Maine. The sessions are the start of the band's transition back from a virtual performance mode to a full concert band schedule. The Maine Pops have not rehearsed in person since March 11, 2020.

Maine Pops musicians are highly encouraged to take advantage of this nine-week outdoor period to download music, prepare individual instruments, and "work out the performance kinks" as the band focuses on a return to indoor rehearsals in September.

The band is also looking to recruit musicians from the greater Portland area to join the ensemble. Since the pandemic, many band members have either relocated to other parts of Maine or moved to other states. Those interested in joining the band should visit the band’s website at https://www.mainepops.org/the-band/#howtojoin.

The Maine Pops Concert Band has not been completely idle during the pandemic. Much has been done over the past 10 months to keep the band's musicians actively performing via virtual means. Members of the spent the spring of 2021 in virtual rehearsal, with about 30 members recording music for five single performance releases between February and June. The band also released a Christmas concert in December of 2020 and conducted weekly online rehearsals to keep musical skills active.

Currently, the Maine Pops is rehearsing nearly 20 selections; compositions that will be rehearsed during nine-week summer session.