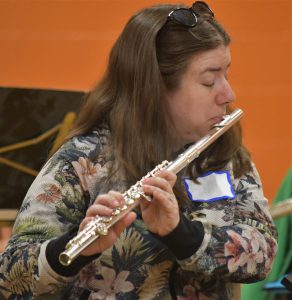 The Maine Pops Concert Band is back!!!

After 16 months of Zoom calls, newsletter updates, muted online rehearsals, and a slew of virtual music performances, the Maine Pops Concert Band reunited for a 90-minute rehearsal session inside the Mason-Motz gymnasium in Falmouth on July 8.

Nearly 40 members of the band used the spacious surrounding of the gym floor to go over a series compositions under the direction of an elated David Watts. Band members saw a few new faces, as well as some musicians who have returned to the MPCB following an extended absence. Still, most attending were musicians who were with Maine Pops when COVID-19 brought the 2019-2020 and 2020-2021 season to an abrupt end.

Watts indicated tonight that the weekly summer rehearsals - slated primarily for the Falmouth Village Park - will be treated more like a weekly performance more than standard rehearsal. He said the main focus is for musicians to get back together, rebuild endurance, and get used to playing together as an ensemble.

The 40 members who appeared tonight are hopefully the start of our gradual return to full strength. There is hope that many of our musicians start returning as the summer proceeds, but we also need to recruit musicians to fill our instrumentation needs. Some have indicated that will not be returning, and some have moved out of the greater Portland area. Band president Bob Swerdlow encouraged band members to look for potential members that can contribute to the band's efforts as they prepare for the fall season.

The band's next rehearsal is slated for July 15 at Falmouth Village Park, beginning at 6 p.m.